skip to main | skip to sidebar

I've been waiting a long time to be able to show this to people and we now finally released the official season 1 trailer for "league of legends". We also announced a $100,000 tournament, so make sure to check out our free-to-play game here: http://www.leagueoflegends.com/

So, here it finally is, my directorial debut which I've been working on for the last 9 months (watch above or click the link below):
http://www.youtube.com/watch?v=IzMnCv_lPxI&feature=channel 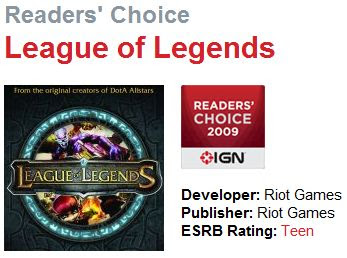 Well, not only is "Cloudy with a chance of meatballs" nominated for a Golden Globe (yay!) but also "League of Legends" received a bunch of awards.

We just got the IGN reader's choice award in the categories multiplayer and best PC strategy game!

Gamespy's readers even made us Game of the year! So, keep it coming... the Oscar is still around and I really hope Cloudy gets a nomination =) 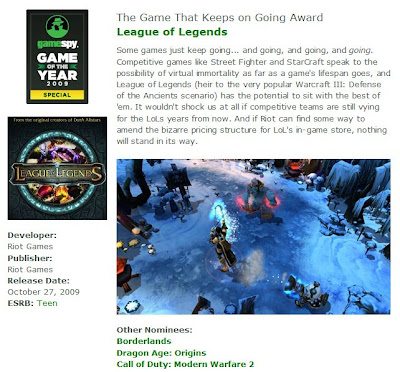 Kodu in action - and for free on PC!

Well, Cloudy is out for three weeks now and still going strong. I think that Sony is really happy with how good Cloudy is performing. It's always a privilege to be called to work on a movie like this one and I'm extremely thankful and happy to have been a part of it. 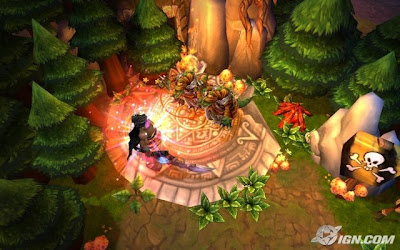 At RIOT games we are constantly improving the existing animations and animation system. It's great coming into a company with an existing pipeline and helping to make it even better. In the last few weeks we made some major improvements and the game clearly shows. What's more important is that the beta users are noticing even without us telling them what we did... so, all the hard work pays off. And talking about a challenge. Most of our animation clips are under 1 sec. Animating a believable kick, backflip, punch etc. in under 1 sec is a challenge in of itself, and I'm constantly learning how to find shortcuts to make the motion look believable while maintaining the speed.

Now for something completely different. There are two things I encountered a lot lately that I wanted to share with you. I noticed how important these things are to an animator's career and would like to pass them on. Both of these I would qualify as "recommended skills" before even touching a mouse/pen and starting animating. If you feel like you've never worked on these skills, now is the time:

Well, in my role as a senior animator I've been dealing more and more with people sending us/me emails about job offers or questions of how to get into the industry. I always answer those emails and sometimes take the time to explain things for 30min or more to help our applicants in their career. And you wouldn't believe how many people forget to send a Thank You-email afterwards, or lack the overall skills to write a polite email in the first place. I know for a fact that time and time again people are not being taken for a job since their social skills lack the easiest things like saying "Thank you" or using a "please" in their sentence... If a company takes the time to answer your email (which happens rarely enough in this busy industry) then you should immediately write them back, say Thank You, listen to their advice, and make sure to follow up on what's written in the reply... Some great talent never gets an opportunity to animate because of this. There is a reason why this is the first skill that Student Volunteers get reminded of when coming to SIGGRAPH...

2.) Have confidence before you animate!

Ever had those moments thinking: "A 360 degree backflip kick followed by a heartfelt monologue about a character's misery, and all of it animated in 3 days - I can never do this!"?
If you are thinking like that, I can almost guarantee you, that you're right and you won't be able to do it. The more I animate, I realize how incredibly important confidence is in our daily job. Believe in yourself and you'll become a better animator. It's that simple. Don't shy away from tough scenes and deadlines. Embrace them. Let me explain this a bit. 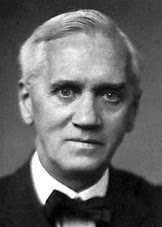 Ever heard of Alexander Fleming? This famous Scott "invented" penicillin. It took him over 200 tries to get there. A reporter once asked him how he feels about his 199 failures. Fleming answered: "Oh no, Sir, I did not fail 199 times. I just found 199 ways how not to make penicillin".
He was confident that he would solve this puzzle no matter how long or much effort it takes. Failure is not a fact but a personal view of things. If I ran 100m in under 10 secs people would applaud me and write about it in the newspapers.
Tyson Gay ran 100m in under 10 seconds and had a new personal best time, but in the shadow of Bolt running even faster that day people regarded Gay's time as a failure. You see? Failures are not "happening" they are just being "called" into existence... and this lies within your own power.
If you can't animate a 360 degree backflip today, then this should not keep you from trying it, learning how "not" to do it, and get better at it for the next time. If you ever want to work at a big animation house this confidence, this optimistic view of "I can tackle this", will help you become a better animator. It's not about being cocky but rather about not to doubt yourself before even trying. The best animators I've met in my career are humble and confident at the same time, not shying away from a challenge but embracing it.

I hope this helps somebody out there, struggling with either. You can know everything there is to know about animation, but if you can't write a polite email or have confidence in yourself, you'll never animate to your full potential - or never get the chance to show it.

Have a great week, everyone, God bless,

Cloudy with a chance of meatballs honestly rocks

Wow, it's really that good...
My wife and I just returned from the "Cast&Crew" premiere of "Cloudy with a chance of meatballs"... and we loved it. It turned out to become such a great, fun, entertaining movie. Go and watch it this weekend and decide for yourself. I'm sure you will have a good time. Despite the really funny humor, the great style, and the entertaining story, I was especially happy about the great job Mark Mothersbaugh did on the music. Yeah, I know, I'm too involved for a more objective view on the movie, but I honestly think that you will like it a lot. All the attending people that never watched it before liked it just as much as the crew did.

Thank you, Sony, for an amazing time working on this wonderful movie... and thanks to the crew (and esp. Pete Nash) for letting me be a part of it. All the hard work paid off, fellows. So, now go and get a ticket and then spread the word - it's a movie for all ages and it's worth every penny!

It's been a while since I posted and I wanted to let you know what I've been up to lately. I started my senior animation position at RIOT games, a great game company located in Culver City, LA. They have been working hard for the last 4 years on a game called League of Legends. If you have ever heard of one of the most successful user generated contents of all times "DOTA" (WarCraft III) then you should listen closely. The people behind RIOT are the people that created DOTA. 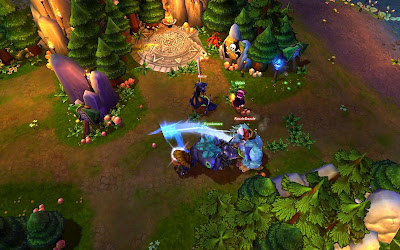 Now, here is the best news: the game will be completely free. Yes, you read correctly, completely free. You can financially support the game by buying cool accessories or more champions to play with (but it's possible to unlock everything by playing, too). But wait, we talk about a multi-million dollar AAA-title here!

So, how does my job now look like? Just picture a multitude of characters, all completely different, from bipeds, to quadrupeds, up to spider-like creatures that have a wide variety of different moves (emotions to actions)... I currently skim through the sheer endless list of animations to help polish some of them before the game ships (they've done a great job so far) and I will help define how future characters are being created and implemented (streamlining the current process). Finally, later down the road I hope to animate on completely new characters.

The best part is the job is a lot of fun and the team is awesome. We have an artist's section where all the art is being created and all the guys are extremely nice, talented, and helpful whenever I have question. And man, do they know the game well. I haven't found a magic spell or special move that they wouldn't know by name and character. If you think that chess is complicated, try to balance 30+ different characters! It's really cool... but they still beat me with one hand tied behind their back, haha. 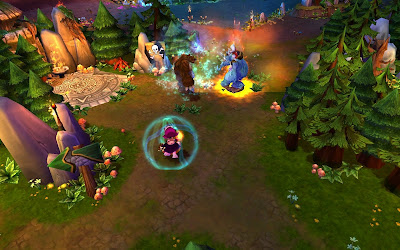 So, check out the game when it hits open beta this late September (estimated) and let me know what you think. It's easy to learn and difficult to master and won't let go of you easily... It was voted "Best strategy game of E3" and if you see how hard we are working then you know exactly why! 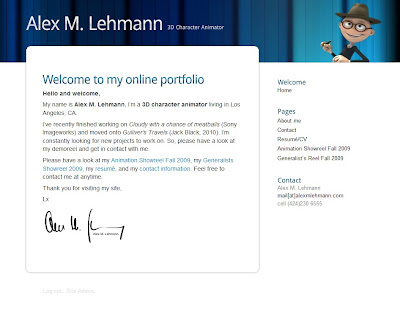 It's done, my new website and showreel are both finally online. It has been quite a ride getting to know CSS, HTML and PHP enough and installing a "professional" server-based blogging software on my private server - but I'm happy with the result and the future ability to make changes to this website and potentially integrating the blog to this website now. Please feel free to go to the website and click on the various buttons, check out the new reel, and overall let me know what you think. I hope that the site shows up fine on your browser and system. If not, please let me know.

The link has not changed. It is still: http://www.alexmlehmann.com/

Comments are always welcome, thank you very much,

I often find that my cycles get better polish if I move them through actual space instead of animating them on spot... it helps me to see the arcs of the feet a bit better. I also had to speed it up a bit - it was too slow, imho.

So, here is the new version...